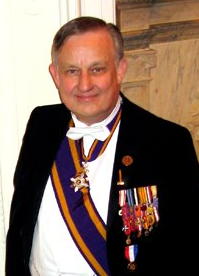 David Ralph Curfman, 65, neurosurgeon, musician, and civic leader, died at his home in Washington, D.C., on Tuesday, July 24, 2007. The cause was acute myeloidblastic leukemia.

Dr. Curfman was born Jan. 2, 1942, in Bucyrus, the son of Ralph Oliver Curfman and Agnes Mozelle Schreck Curfman. He was graduated in 1965 from Columbia Union College in Maryland with a Bachelor of Arts degree, majoring in biology and chemistry. He then attended George Washington University, where he completed his Master of Science degree in Neuroanatomy, and completed work toward his Ph.D. in Neuroanatomy between 1967 and 1970. Dr. Curfman earned his M.D. degree from The George Washington University School of Medicine on May 27, 1973. He also served his general and neurological surgery residencies there. At his death, Dr. Curfman was Chief of Neurosurgery at Providence Hospital; Assistant Clinical Professor of Neurological Surgery at the George Washington Medical Center; Senior Attending in Neurosurgery at Washington Hospital Center; and President of the Washington Academy of Neurosurgery, all in the Washington, D.C. area.

A neurological surgeon in private practice in Washington, D.C., Dr. Curfman lectured extensively throughout the United States on the medical history of American presidents while maintaining his clinical appointments and surgical schedule in the nation's capital. He presented his address on “The Medical History of the Father of our Country – General George Washington” to many groups during the celebration of the bicentennial commemorations of the death of General Washington in 1799. Dr. Curfman served as national chairman of the General Society of the Sons of the Revolution for this special commemoration assisting in the funeral reenactment at Mount Vernon on Dec. 18, 1999 and fully planning the reenactment of the memorial service held on Dec. 29 at the Old Presbyterian Meeting-House Church in historic Alexandria, Va. He was also an enthusiastic member, elected official, and valued advisor to literally dozens of hereditary associations, including the Sons of the American Revolution and the Children of the American Revolution.

In addition, Dr. Curfman was an accomplished musician, having studied both piano and organ. His life-long interest in choral music and liturgies involved him in instruction at the Lutheran Theological Seminary in Columbus. He was a frequent lecturer in Judeo-Christian ceremonies and liturgies. As dean of the District of Columbia Chapter of the American Guild of Organists, he served as Washington Program Chairman of the International Congress of Organists, held for the first time in the United States in 1977. He had also been a member of the development committee for the national office of the American Guild of Organists and a member of the Royal School of Church Music (England).

Elected to the Board of the Cathedral Choral Society in 1979, Dr. Curfman completed two terms as its president, overseeing the transition in 1984-1985 between the Society’s founding conductor Paul Callaway and his successor Dr. J. Reilly Lewis. Dr. Curfman was for many years chairman of the music and programming committee for the 200-member resident symphonic chorus of Washington National Cathedral. In 1983, Dr. Curfman designed the Advent Wreath with holly garlands attached to the torches, which is borne in procession at the Cathedral Choral Society’s ever-popular Joy of Christmas concerts. In 1988, he organized major events surrounding the Society’s “Russian Riches” Concert (1988) to commemorate the Millennium of Russian Orthodox Church, which was recorded on compact disc. In 1997, Dr. Curfman was awarded the Anniversary Medallion for long-standing meritorious service to the Society as a Trustee.

At his death, Dr. Curfman was also on the board of the Leo Sowerby Foundation; historian and board member of the Christmas Pageant of Peace (National Christmas Tree Lighting by the President); president of the Board of Directors of the National Columbus Celebration Association (Washington, D.C.); and a founding supporting member of the United States Capitol Historical Society.

Dr. Curfman was a charter member of the Galion Historical Society.

Dr. Curfman is survived by his wife of 37 years, Blanche L. (Anderson) Curfman, a widely-recognized research microbiologist at the National Institute of Neurological Disorders and Stroke (NIH).

His funeral will be held in Washington, D.C. on Saturday, July 28, at Grace Evangelical Lutheran Church in Washington, where he had once served as assistant organist and choirmaster. Among those participating will be Father Daniel P. Coughlin, Chaplain of the U.S. House of Representatives.