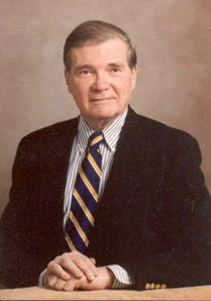 Col. McCarty graduated from the University of California at Los Angeles with an AB in Economics. He completed an MA in Management and Personnel Administration from George Washington University. Col. McCarty has completed graduate studies in Archaeology at Worcester College of Oxford University and the Catholic University of America.

A career military officer, Stewart Boone McCarty, Jr. entered active duty as an Officer Candidate March 1, 1944, and served as a Commissioned Officer in the Regular Marine Corps until retiring as Colonel on August 1, 1974. Col. McCarty commanded units from platoon to battalion, in combat and in garrison, interspersed with staff assignments and attendance at military schools. He has been awarded the Legion of Merit; Bronze Star Medals with combat "V" in Korea and Vietnam; the Purple Heart; the Meritorious Service Medal; as well as many other United States and foreign military awards. Col. McCarty is currently a consultant in management and foreign trade matters.


Chivalric Orders
* The Most Venerable Order of the Hospital of Saint John of Jerusalem
(Officer Companion)
* Sovereign Military Order of the Temple of Jerusalem (Grand Cross, former
Grand Prior, Priory of St. King Charles the Martyr, Washington, D.C.)
* Knight of Grace of the Military and Hospitaller Order of Saint Lazarus of
Jerusalem


Other Notes
Col. McCarty is a member of Alpha Mu Gamma, the Army Navy Club of Washington D.C., and the Chouteau Society. He was a board member with three television stations, and served as Vice President of the Scientific Exploration and Archaeological Society. His avocations include skiing, scuba diving and biking.