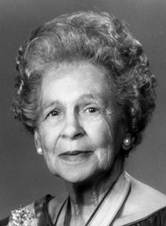 Mary Genevieve Forbes Morse of Richmond died peacefully on Sunday, November 20, 2011. She was born June 8th 1905 in New Rochelle, New York. Most of her life was spent in Charlottesville, VA. Her parents were James Forbes and Mabel Sabin Forbes. She was preceded in death by her husband, Frederick Tracy Morse, her son, Robert and her granddaughter, Ann Papineau. Her one brother and three sisters predeceased her as well. Survivors include one grandson, Bill, his wife Jo and their son Will, all of Roanoke, VA and one great grandson, Paul Papineau and his wife Charlotte, both of Richmond.

Genevieve was truly an extraordinary woman. She graduated from Louisiana Polytechnic Institute in 1932 and went on from there to perform a life of Leadership and Service to others. Mrs. Morse held high positions in many of the organizations she loved, but, they are too numerous to list here -just Google her. The two organizations that she was affiliated with for the longest times are Kappa Delta Sorority and the Daughters of the American Revolution.

At Louisiana Tech she joined the local sorority, Lambda Theta, which became KD’s Alpha Chi Chapter in 1932. Genevieve’s association with the sorority continued with her being elected National President in 1959, a position she held for 8 years. Continuing her lifelong association with Kappa Delta she was inducted into the Order of the Emerald in 1983, the Hall of Honor in 1987 and ultimately had KD’s new-member education award named for her.
Mrs. Morse became a member of the DAR by being accepted into the Jack Jouett Chapter, Charlottesville, VA in February of 1938. She ascended to the level of Virginia State Regent and then moved up in positions at the national level. Holding the office of Vice President General NSDAR from 1962 to 1965 she later served as Curator General and Chaplain General as well. She was then elected as Honorary Vice President General NSDAR for life in 1978. Mrs. Morse became a member of "The Order of the Crown of Charlemagne in the USA" in 1985 through her American ancestor Gov. William Leete of CT.

Being a writer and historian, Genevieve penned books outlining histories of these two organizations and a volume of poetry entitled “Through the Years and Other Poems”.

The family will always be grateful to the personnel and volunteers at the Lynmoore Assisted Living Facility in Henrico, VA that made her life enjoyable and comfortable to the end.

Her Memorial Service at Emmanuel Episcopal Church in Greenwood, VA, where she sang in the choir as a young girl, will be held on Saturday December 10th at 3:00PM. The Reverend W. Ramsey Richardson will be conducting the service. A private interment will be held at the University Cemetery in Charlottesville, VA at a later date.